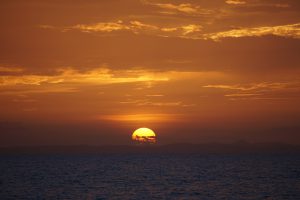 Been a while since I updated the sailing blog. I’ve been too busy sailing and doing security research, but I thought I should put out an update of our journey since Cayo Enrique.

We left Cayo Enrique very early in the morning about a week ago. We delayed a day due to high winds on the previous morning. Our planned destination was an island off the south coast of PR called Caja de los Muertos (Coffin Island). Unfortunately, though we woke up at 5 a.m., we did not get going early enough to avoid the wind and waves pushing against us as we moved east. We were moving so slow at a little more than 3 knots that there was no way we would make it that day. Plan B, anchor at Gilligan’s Island.

Yes, that is the name and yes, it is apparently named after the TV show. We anchored in a protected cove and dropped the dinghy down to cruise into the island. There were lots of families having picnics and hanging out on the beach. The water is very warm, it’s almost like sitting in a hot spring and that’s what lots of people do: They bring tables and chairs and set them up in about two to three feet of water, sit and have a picnic in the water. There was a ferry shuttling the people back and forth from a nice resort on the main island. It was pretty busy.

The next day we again got up at 5 a.m. and headed into the east winds. The waves weren’t so bad on that day so we arrived at Caja de los Muertos island in a reasonable amount of time. Anchored alone off the island, we were both pretty tired from the last two full days of activities and so stayed on the boat until the next morning. We took Namaste in to look around after breakfast. This island is a state park that people visit either by boat or ferry, with a beach and a lighthouse on top of a hill. 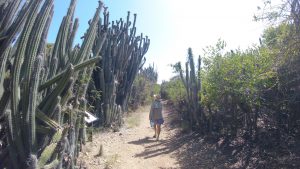 A trail crosses the island and up a few hundred feet to an abandoned lighthouse. Unfortunately, you can’t see much from the top of the hill due to the high bushes, and the lighthouse is closed and probably not safe to be inside.

This island is the subject of some interesting legends involving pirates and treasure. You can read a bit about it here, though I found that article a bit confusing.

We got back to the boat and decided we needed to get to the anchorage outside Salinas that afternoon because we were running short on water. The wind wasn’t directly on our nose and so finally got to sail a bit, which made Shelly quite happy. We pulled into the bay and saw a couple of manatees as we were anchoring. The next morning we pulled into the marina here for a few days recovery before the final eastward push to the east coast of PR.