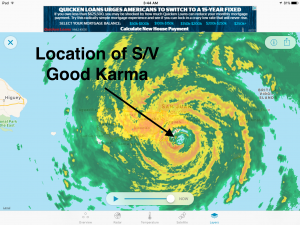 Last Radar Image of Maria Before Loss of NWS Radar

And so, less that two weeks after feeling lucky to have survived cat. 5 hurricane Irma, we suffer a direct hit from cat. 4 hurricane Maria: 155 mph winds as it came on shore with the eye passing directly over our marina. The National Weather Service radar located a bit east of the marina went offline just before the eye made landfall. Officially it landed “near Yabucoa,” which is only a few miles from the Yacht Club marina and inland a bit. But because the radar died prior to landfall of the eye, I’m not sure how accurate anything is. Either way, the eye passed over the marina.

We have no clue as of yet to the state of things but to be realistic, we’re not holding out much hope that the boat did not suffer catastrophic damage. You never know, of course, and it was tied up as securely as possible. We probably won’t have any definitive news for days as the entire island of Puerto Rico is without power now as the hurricane rakes over the interior.

But hey, just to reflect on the mind boggling fact of being hit dead on by the largest hurricane to hit PR in 80 years RIGHT AFTER dodging the largest Atlantic hurricane in history, here is the Weather Underground hourly forecast today for the marina: 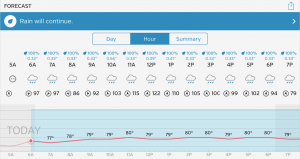 “Rain will continue with 100 percent chance of rain throughout the day. The morning commute should see quite breezy conditions, with winds from the north at 97 miles per hour. Look for winds to shift to the south and increase to a brisk 122 miles per hour by noon, and then decrease over the afternoon to around 95 by dinnertime.”


Posted in Sailing by Mark with 2 comments.