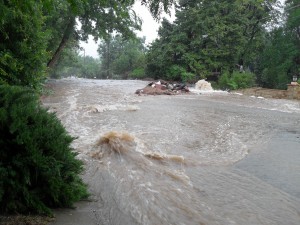 The pic above is 7th street, a block east of our house. I took this photo yesterday and we haven’t had significant rain for about 24 hours, but the 7th Street River has only subsided a bit. Click or tap on any picture to get a full resolution view of that pic. Interestingly, I mentioned in my May 14th post that Gregory Creek was flowing for the first time in 3 years. Four months later it has destroyed streets, bridges and houses.

The story was that the Pennsylvania Ave. culvert was overwhelmed and overflowed, blowing gravel and rocks out into, among other places, the house pictured below. It looks like a foot deep wall of gravel overwhelmed the house and flooded the basement and first floor: 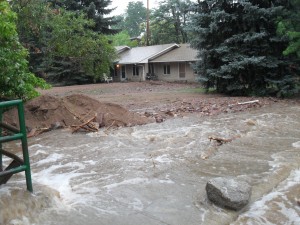 The water also washed into the houses just downstream of the culvert mouth:

When the stream finally eroded the sides of the culvert and collapsed the street as pictured in my previous post, the water subsided as it was channeled into the culvert trench. BUT, the next culvert down crosses under 7th street and it too was overwhelmed and has not collapsed, so a lot of water is overflowing onto the street as seen just behind Shelly below:

Some water makes it through the culvert but is apparently being blocked at the far end producing the 7th Street Geyser, shown erupting below: 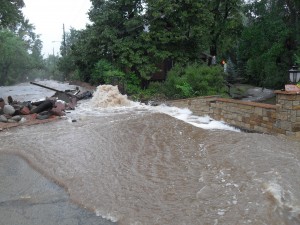 All of these pictures were taken in the block just east of our house. We talked with our neighbors and found that every single one of them had significant flood damage, uphill, downhill, and directly across the alley from us. Incredibly, our house came through completely unscathed, not even our landscaping was touched. The two reasons for this, I believe, are luck and the fact that at 11 years old, we have by far the newest house.

Luck came in the fact that Gregory Creek blew out to the east instead of west. If even a bit of that water diverted west we would likely have been flooded. Interestingly, Shelly found that the water pretty much flowed in the direction predicted by the flood plane maps recently updated by the city. But Gregory Creek wasn’t the whole story, there was also significant water flowing down 6th street in front of our house. Because our driveways were built with a slight rise at the property line, no water streamed into our yard. Our neighbor on the north (downhill) whose house is literally 10 feet from our had completely flooded, as did the next 4 houses down. The house directly behind us flooded as did the house just uphill of them and the house just uphill of us.

I did a short jog around The Hill and surveyed the damage. A significant number of houses are flooded with little rhyme or reason, some yards are wiped clean, houses on steep slopes are flooded, alleys have turned into deep gullies. There is debris everywhere, it even looks like a tree was pushed into a parked car on 6th and College. You could not have predicted who would have been flooded out from this storm. Correction, you could have tried and you would have been wrong. I read an estimate that there is $150 million in road damage from this storm, I’d be surprised if it were less that $1 billion.

We thought for sure at least our crawl space would be a lake but it is bone dry. Despite the guy in the picture below taking credit for watching our place while we were on vacation, after seeing all of this devastation I find it almost miraculous that we have absolutely no damage. 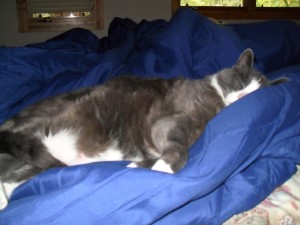 Posted in Great Boulder Flood by Mark with comments disabled. 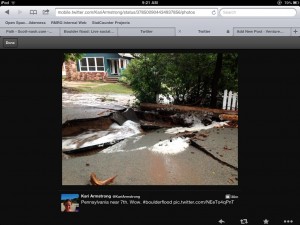 While we’ve been away, Boulder suffered a devastating 100 year flood, apparently so destructive that Obama has approved federal disaster aid for the county. Wow. Last time we went on vacation the big Fourmile fire raged and forced evacuations in our neighborhood, missed that one too. The people watching our house say it is ok.

I found the pic above on a twitter account of Kari Armstrong. This shows where Gregory Creek passes under Pennsylvania between 6th and 7th streets. This little creek is dry ten months out of the year, normally flowing in April and May during the spring thaw. Nice to listen to on warm spring evenings, not so nice during floods.


Posted in Great Boulder Flood by Mark with comments disabled.