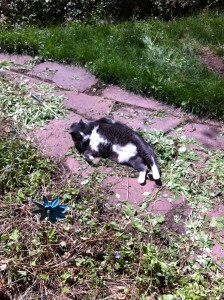 Well this spring is shaping up to be more normal than the previous two years when we had sweltering, dry weather. Last weekend it warmed up enough to start the big runoff. Lots of snow remains in the foothills and the high peaks look almost solid white. Even Pikes Peak is largely covered snow. 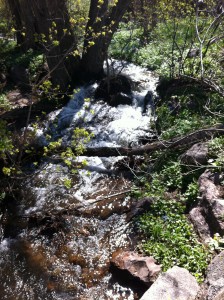 Gregory Creek which flows just behind our house was running for the first time in probably three years, pic on right. 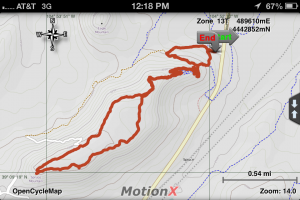 On Sunday we visited Colorado Springs for Mom’s day (hi mom!). On the way home we hiked in a cool open space area just north of Palmer Lake called Spruce Mountain Open Space. GPS track on the left. There is a large trail system for both hikers and mountain bikers. It winds around Spruce Mountain, which is one of the buttes between Castle Rock and Monument, plus through the surrounding prairie. We only hiked about 5 miles, a small portion of the total trail system.

Interestingly, we noticed no pine beetle kill in this area. 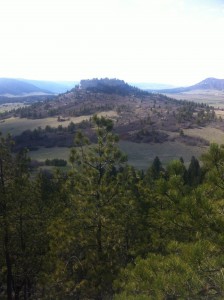 Why is that? There were plenty of spruce trees, which seem to be immune, but we also saw many pine trees. It could be that the beetle hasn’t made it to this area even though they seem to be everywhere in Colorado. One thing that makes this area different is that it gets a lot of moisture. The Palmer Divide seems to catch the most of every storm in the area. I wonder if moisture, or lack of it, drives the pine beetle devastation in the state.

Also of interest: As I was leaving for a hike up Flagstaff last weekend, I spotted what may be the first confirmed sighting in modern times of a “sealcat” in Boulder. I was able to get a picture before it rolled away, shown at the top of this post. A sealcat is believed to be a cross between an elephant seal and a domesticated cat. They are dangerous at close distances but only move about as fast as a ground sloth. Like the North American river otter, this species hasn’t been seen in Boulder in a century! I have submitted this photo to the Colorado Division of Wildlife for analysis and possible confirmation.