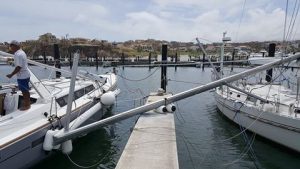 Power of a Hurricane

Finally received some detailed news about Good Karma today. The first was the bad news, the boat next to ours demasted in hurricane Maria and is now leaning on our boat. They had what is called a “deck stepped” mast, meaning the base of the mast is attached to the deck rather than what we have, a “keel stepped” mast attached down to the hull of the boat. A keel stepped mast is much stronger and is the norm for blue water boats.

You may notice in the above photo that not only is our neighbors mast broken off, it is also folded. I am impressed that the hurricane was so powerful it could break what was essentially a pole with a low profile to the wind. Yet it did break, as were many deck stepped masts in the marina. How the mast bent in half the way it did is a mystery.

The good news is that Roberto, the dock master at the marina, said our boat was dry inside and did not mention any other damage. From what we can tell, Good Karma is repairable though how and when is problematic.

Puerto Rico is in dire straights with this disaster. We have heard messages from friends all over the island and they say it is catastrophic. Long lines for food, gasoline, fresh water, the bank. Everything. And this is a week later. Communication is just starting to be restored though power is still out over most of the island. The airport in San Juan is a mess with only a very few flights coming and going. Very few supplies are reaching the island.

This is an American territory and they deserve the response that Huston and Florida have gotten for hurricane relieve, yet they are not. Trump FINALLY suspended the Jones Act, after a week, to allow faster shipping to the island from foreign ports. Shipping businesses have greedily lobbied against this suspension, which meant only American flagged ships could dock and unload in Puerto Rico to protect American shipping companies, the most expensive in the world, from free market shipping.

The Jones Act was suspended for Texas and Florida almost immediately for their hurricane relief, but it took a weeks worth of political pressure to make Trump change his mind about Puerto Rico, while the people there suffer. Unforgivable!


Posted in Uncategorized by Mark with 2 comments.