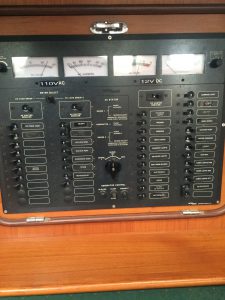 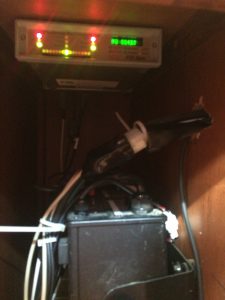 Pactor Modem (above, with lights) and Marine SSB Radio Below

One of the first systems I tackled on the Good Karma was the ssb radio. Nothing is easy and this proves the rule. The importance of this radio is that it is a long distance communication system, like over a thousand miles. This is necessary for ocean travel where your only communication link may be this radio. Here is my experience, skip this if you have no interest in radios:

This is a long-winded essay about how to patch together a circa 2002 model ICOM M710-RT marine band SSB radio, a Pactor modem, and a modern Macintosh MacBook Air to work as an email system. This is about hacking old technology and new, incompatible systems to make them work together, like something they’d do on Star Trek.

My recently acquired sailboat has a Marine Icom M710-RT SSB radio and a Pactor II Pro modem (with pactor III firmware upgrade). You can set this radio up to send and receive email over HF frequencies while out at sea far from land. The data rate is slow so only small data sizes are practical, like text email.

A system called “Sailmail” uses the marine bands to send and receive mail. Unfortunately, sailmail is a subscription service that costs a bit over $200 per year to use. Sailmail depends on a system called “winlink” to work. Winlink is a radio email service set up by amateur radio enthusiasts (hams).

Because amateur radio cannot charge for services, winlink is free IF you have one of the advanced amateur licenses AND an amateur radio. I have the license. All I needed was the radio set up on our boat.

Getting the radio set up was an issue. I have a Yaesu FT-993, a great amateur radio, but I would need to install it and supporting systems to get it to work. And on top of that I’d still need to keep my ICOM for marine band operation as the Yaesu would not operate on those frequencies. (Note: I probably will install my amateur radio in the future as it is a far more versatile radio on ham frequencies).

But I also knew that a trick radio manufacturers use to keep their costs down is to build one radio that they can enable for whatever market they want to sell into. So essentially the same generic radio can be built and then set to work on ham freqs or marine freqs or police freqs, for example. These radios can be enabled to work on all frequencies they are built for, the trick is to know the secret modification and do it yourself.

In the old days this was accomplished by cutting traces on a board or some simple hardware modification. Since the late 1990s, almost all radios can be changed by reprogramming the firmware.

So I knew both of these radios could be programmed to work on both amateur and marine freqs. And it seemed pretty straightforward to choose to reprogram the system I already had in place. Another technical reason to try to reprogram my ICOM – it is legal to use the marine radio to transmit on amateur freqs but NOT legal to use the amateur to transmit on marine band freqs. Why? Because the FCC wants only approved radios transmitting on controlled bands like marine, police, fire, etc. The amateur band allows a lot more leeway, you can pretty much use any radio as long as you don’t exceed the limits of the band, like keep the power under the legal limit. So the marine radio can transmit on ham bands, you must have an amateur license of course.

So I set out to get my marine band radio modified and working on ham bands.

The ICOM M710-RT is a great, though somewhat dated radio. I also have a Pactor II pro modem, an expensive system that would be quite expensive new, I believe greater than $1000 for an out-of-the box modern one. The modem can be controlled by a computer via a serial cable.

The system connection is as follows: Computer ——-Pactor Modem———Icom Radio

The connection between the modem and the radio is already in place and there is no need to mess with it. The computer-to-modem connection is an old 9-pin serial port, not built into Macs. Fortunately, there is also a Keyspan USB-to-serial adapter in place so at least I can use a USB port that IS on my Mac.

I consulted several web forums about getting this stuff to work together and what has been successful or not, and after experimenting a lot I finally got things working after about two weeks. I am an expert in software, devices and radios and this still took me about two weeks, it was NOT easy. Here’s why:

Winlink is a Windows program, there is no Mac version and I’m not sure if Winlink has been updated at all since 2008 or so. I have a Mac. You can run Windows programs on a Mac using various tools, some are better than others. A program called “Crossover” was recommended by many and so I bought that. Not too expensive if you don’t need tech support. Considering that we live in a world of shareware, it’s actually quite expensive however.

Then I needed to get the Keyspan USB driver for Mac. Pretty easy, it’s online. Unfortunately it took a while to realize there was no native driver available, my Mac did not warn me when I plugged the Keyspan in.

Getting Crossover to work was not difficult. I set it up to run a Windows 7 environment. Crossover does not come with a lot of OS support and you have to “install” utilities such as an unzip utility. This is required so that you can unzip the Winlink software and install it in your emulated Windows environment. There is also some funkiness setting up the serial COM port emulation to USB on a Mac, but not really difficult and there are good write-ups out there on the web about how to do this.

Winlink is not extremely user friendly but it’s not hard to figure out and there are youtube tutorials out there.

So, modem firmware updated. Next I tried to send some radio email via a Winlink station. No can do, my Icom would not allow those frequencies. Winlink won’t let you use the Marine frequencies either, you need Sailmail to do that.

Now it gets fun, trying to update my Icom firmware.

First I email Icom and ask for the tools. They said they can reprogram the radio but I have to get it to an Icom service center. That is absolutely ridiculous, I’d have to extract my radio and ship it to another state and wait for them to get around to it, and probably have to pay a few hundred dollars for the privilege.

I did some more digging around and found out that the Icom can only be programmed via a special DOS tool using a special cable. DOS. Didn’t that go away in the 80s? Wow. But not unheard of, it’s a legacy product supported by a legacy tool, not uncommon in the firmware industry.

What was more disturbing were claims that you needed to have a computer running DOS natively, not on top of Windows, and the machine had to have one of the old-style serial ports. Turns out that isn’t true if you get a good DOS emulator. That was better news. The recommended emulator was “Dosbox,” it’s free though they ask for a donation.

There is a Mac version of Dosbox that works well. Next, get the Icom software tool and a cable. Search around through the various forums and google, and you find references to an app called EX1726.EXE. The tool has been pirated and is out there if you look. The cable is an OPC-478.

Next get a USB-to-Serial programming cable for the Icom. Ebay has several so I ordered one, shipped to the marina in a couple of days. Plug it in to my computer and Icom radio (and another USB driver from the web). Set up a Dosbox serial port and run EX1726.EXE in my emulator.

Seemed to be working, but in reality I had no real feedback that it was working at all. This was a simple firmware read-modify-write program. I’ve written these apps and even had a patent on a certain aspect of reprogramming a device way back when. Anyway I knew what was “going on behind the curtain” so I tried the function that reads the memory and got a “clone error.” It wasn’t working.

I dug around a bit more and found a Yahoo group dedicated to the M710. I joined and bingo. All kinds of tech information on this radio and pirated software. Turns out the cable I got was for the M710 but doesn’t work on the M710-RT. The cable type for the RT version is OPC-552 Also, the app needed was called EX2144.EXE made specifically for the RT version. Ok. Well, I’m confident I could have modified the cable I had to work but I didn’t have the parts available. Found another cable supplier on Ebay and ordered another cable.

Cable came in, fired up the radio and YES, I could program the radio. I enabled all the ham HF bands and went back to Winlink. This morning I was able to send and receive email over my SSB radio on ham frequencies. Success, but not recommended for the faint of heart.


Posted in Electronics and Radios, Hacking!, Sailing by Mark with 2 comments.