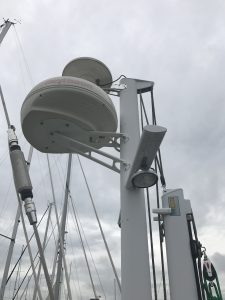 Well, figuring out how marine electronics are supposed to work and coming up with a good installation layout is proving to be a challenge. Despite having an enormous amount of knowledge of electronics and computers, marine electronics are in their own special world. The things you’d think would be similar, such as a chart plotter and something like an iPad (both can be used as graphic navigation computers), are not at all.

By the way, this post will be quite boring to most so feel free to stop reading if you aren’t interested in this topic.

Also, wiring is a huge challenge. Ok, so you have a radar unit, which is the big round bowl-looking thing in the picture above, that works with the chart plotter. The chart plotter displays a chart (map) of the area and shows your boat location, like Google maps. Separately, the radar overlays on the map non-static items such as weather, boats, etc. Seeing where boats are is invaluable when navigating in fog or at night. For instance, when we sailed in the San Juan islands off Washington state, a fog bank came in rapidly while we were in a busy channel. Out of the gloom we heard a loud ship horn, ran to turn on the radar (an old clunky one) and could see where the ship was. We could then keep clear. So it is fairly important.

Turns out the radar DOES have a wifi channel to the chart plotter BUT… They recommended wiring it up anyway and using the wifi as a “backup.” That actually makes no sense but whatever.

This all started because we wanted to install an AIS system so big ships can “see” us and we can “see” them. A new AIS required a new chart plotter which required a new radar. BUT, our current electronics are quite old and though they still work, they are very dated and it shows. A new system makes everything safer and given the amount of sailing we intend to do, we will need it.

By the way, click here to see a cool video of ship traffic around the world taken from AIS transponders. Lots of traffic out there!


Posted in Electronics and Radios, Sailing by Mark with comments disabled.