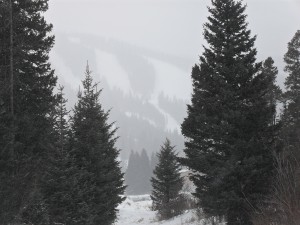 View of the frontside downhill runs from the edgeof the Nordic area.

On Sunday Shelly and I went up to check out the tracks around Eldora’s Nordic center. This is an area of cross country ski trails that are maintained by the Eldora ski resort. Lots of ski resorts in Colorado have these areas. You might ask, why go to a pay area when there are literally hundreds of miles of free terrain to back country ski near Boulder? Well, we went up to skate ski and that requires a groomed trail. Skate skiing is just what it sounds like, you propel yourself along a trail using a skating motion, like ice skating on skis. The skis are designed to optimize this motion and you can get an excellent workout in the wintry mountains this way. 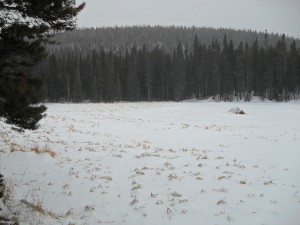 The first thing we noticed was the cold! It was about zero degrees Fahrenheit, cold enough that we both kept on a couple of layers even during the workout. That’s rare, especially for someone like me who, during a workout tends to generate enough heat to boil water.The second thing was that even though we had gotten some new snow, it wasn’t enough to make up for the very thin cover. Many of the Nordic tracks were closed due to lack of sufficient snow and even the trails that were open had many rock hazards. This is a problem, if you ski over a rock you tend to stop immediately resulting in a faceplant. Check out the pic of The Stadium, an oval field you can normally run laps around. You can see the grass poking out. This is usually a completely white snowfield this time of year. 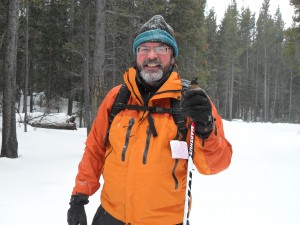 So…. The next problem was that we couldn’t get any glide! Either because of the cold or snow conditions, or both, our skis were too sticky to skate without a tremendous effort. We overheard complaints from the few others out there on skate skis as well. This would have been a better classic ski day, we decided, but we didn’t bring our other skis and had to “suffer” with what we had. I was OK with just being outside as you might see. Shelly was not as enthusiastic but wanted a workout. I took a pic just outside the Nordic Center building. The white spots are close-up snow flakes. She is “enjoying” the cold.  As is usually the case with these kinds of outings, we’ll suffer with poor conditions for a while before giving up. And it was about an hour. Really, it’s part of the adventure, right? 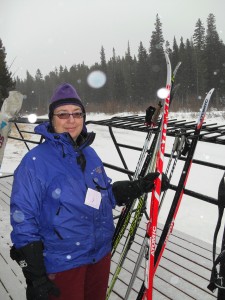 On the upside, Shelly discovered the perfect recipe for hot chocolate. We both agreed that it was the best we’d ever had and made up for a lot. We drank most of it back in the heated car! 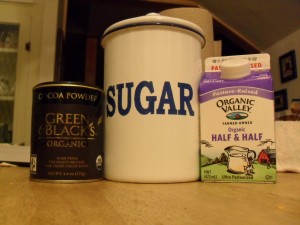 Well, not all adventures turn out great but live and learn, next time we’ll bring more ski options and there’s always next week!


Posted in Trip Reports by Mark with comments disabled.