Ok, this is a long post about diagnosing and fixing a shortwave radio antenna on our sailboat Good Karma. Not interesting for those who are not into technical detail.

On most bluewater sailing vessels there is a shortwave radio for communication, usually called an “SSB radio.” One thing every radio needs is a good antenna. On most sailboats, the antenna is the backstay of the mast, the cable that holds the main mast to the back of the boat. It’s a good choice because it’s basically a long wire that can be insulated easily (necessary for an antenna).

My radio could transmit and receive email and I was happy with it until I notice that the connection from the radio to the backstay was getting frayed (below). I was also having great difficulty with voice transmission to stations that should have been receiving me with no problem. 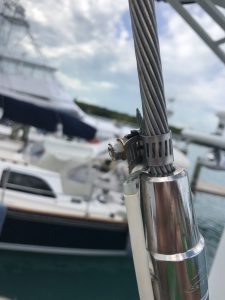 The antenna feed (white wire on left) was connected via an unprotected hose clamp to the backstay. The problem was this is exposed to the elements (water and salt air), not to mention the not-so-great mechanical connector that doesn’t protect against breakage of wire. At Spanish Wells I bought some new hardware (below): 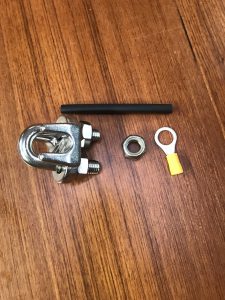 Left to right: A cable clamp, a nut and a ring connector. The clamp would give me a solid connection to the backstay and the nut and ring connectors would grant a smooth mechanical connection between the antenna feed and backstay. The connection point needed to be about 8 feet off the deck and so I needed a ladder. I borrowed one from the marina but because of the tight space on the deck I could not deploy it completely, so I had to set it up with straps on each side to stabilize it, below: 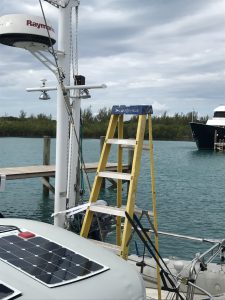 I assembled a great backstay connection and insulated the connector from the elements with electrical tape, shown below: 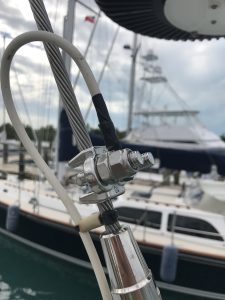 Everything looked great but the radio happened to work worse than before! I didn’t get it and puzzled over this problem for days. I finally decided I needed to look at the other end of the antenna feed cable, which I had to move to get the backstay connection finished. That was it! Below is what the connector to the radio looked like, corroded and almost broken: 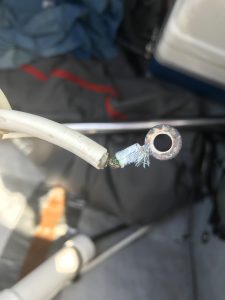 I replaced this connector as shown below: 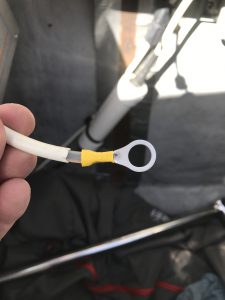 The result was, so far, fantastic. I’m able to contact much more distant stations. The testing isn’t complete without a voice test but I’m optimistic.


Posted in Electronics and Radios, Hacking!, Sailing by Mark with comments disabled.