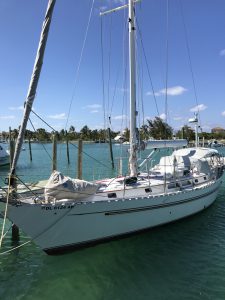 Ok, after being here on the Turks and Caicos Islands for a few days, we find ourselves quite happy to be back in the “first world.” The Bahamas were OK, but they weren’t quite what we call first world. Not third or second either, more like 1.5 world.

So what the heck does that mean, anyway? Well, first world is kind of like the U.S., where the infrastructure is really quite excellent, most people are middle class and the crime rate is low or at least you know where it is high or low. Third world is where 90% of the population would be considered in abject poverty by U.S. standards. In the third world there is no widespread infrastructure and where it exists, in big cities, it is shaky at best. The crime rate may not be high but there is lots of petty crime caused mainly by the poverty. The Bahamas is certainly not at this level. Oh, and as a side note, I’m not sure what “second world” is so I’m leaving that out. I think it used to be the communist countries?

Anyway, the Bahamas have OK infrastructure, but not great, and you can get most anything but man is it expensive. And for what you pay, they don’t have much to show for it. Common food items are way more expensive. Boat hardware was unbelievably overpriced. Much of this was due to the import and VAT taxes they add on, and there again, not much to show for such high taxes. Locals even complained they have to pay those taxes with nothing to show for them. There was also significant poverty in the Bahamas, though not third-world poverty.

Contrast that with the TCIs (Turks and Caicos Islands). These islands are actually British territory and I believe that is the main difference from the Bahamas, which are their own country. There is conspicuously more money here and as far as we can tell they spend it on infrastructure. The grocery store is well-stocked and not overpriced. No wild dogs chasing us, no trash on the beach. In the resort areas it is much like Hawaii, we concluded, definitely a tourist destination in my book.


Posted in Uncategorized by Mark with comments disabled.