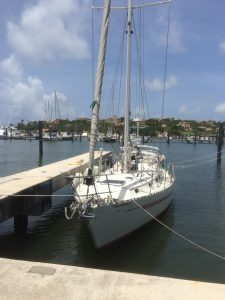 I haven’t posted a sailing blog in a while because we have been waiting here in Palmas to get some boat maintenance done. The maintenance is finally complete and it took a while. I’ll describe below what we had to do and the events leading up to our extended stay here. BTW, we are not suffering!

So what happened: A few weeks ago we had gotten some routine maintenance done on the engine and generator, an oil change basically. We had been waiting to get the service done (nothing happens quickly here, island time you know) so that we could head out for a couple of weeks around Vieques and Culebra islands. We exited the marina and were about 3 miles out when the engine started sounding funny, like it was going to quit. We needed the engine to go east into the wind and waves. After the third engine hiccup, Shelly declared we were turning back. We got pointed back toward the marina and the engine quit. No matter what we did it would not start. I noticed the Racor filter bulb was not full indicating that there was no fuel coming in from the tank.

I could not think of a way to get the fuel flowing again so we put the sails up. We had an excellent east wind that let us sail straight back to the marina entrance. But we still had a problem, we had no way to maneuver in the tight spaces of the marina, or stop, once we got there. And the entrance was tricky, it was somewhat narrow with rocks on both sides, and some decent waves to push you around as you came in.

Shelly called for a tow. This is quite simple back in the states and all up and down the east coast there are boat towing companies. Here, not so much. They do exist, but it turns out they were all working at the site of a plane crash that had happened not too far away the day before. What are the chances?

Shelly called the marina. They said they could help us get in but we’d have to get through the breakwater entrance first. As we approached, we dropped our main and reefed the jib way, way back so that we would slow down but maintain steering. We passed the rocks outside the entrance, they were alarmingly close. The boat, however, handled excellently and we sailed right up to the long outside dock of the marina, and we were going slowly enough that they could stop us with our dock lines. They did come out to help in their small boat but I think events happened so quickly that they really couldn’t tie on and do much.

When telling the story to others, they comment that the difficult part was sailing through the breakwater. We tacked once. Otherwise sailing in was not so stressful as losing the engine. Over the next few days they towed us to a couple other locations using what is actually a large dinghy. The guys here are quite the experts.

What happened to the engine? Diesel tends to get gunk in it from bacteria and fungus that can live in the fuel as long as there is some water. There is always a bit of water in the tanks due to condensation. Over time, usually years, a kind of black, gummy gunk accumulates. Our tanks had a lot, we don’t know when they were cleaned last.

Usually it takes years to get that bad. As we look back, we are lucky our fuel line “chose” to clog when it did. It would have been pretty terrible in the Mona Passage or just about anywhere else after we left Florida up until we got here.