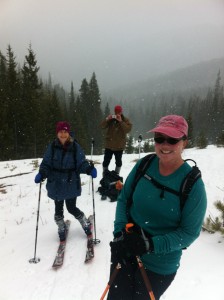 Half Way Up.  Left to Right, Melinda, Clint, Shelly.

Last weekend we drove up to Rocky Mountain National Park and did some backcountry skiing in Hidden Valley with our friends Melinda and Clint. This is an old ski area that closed in 1992 and was rehabilitated several years ago, meaning the Park Service demolished the old lifts and ski structures in the area to make it look more natural. I wrote about the re-opening of the area in my Insolent Guide. It turns out that you can read the chapter online here, courtesy of Google Books illegally ripping of my material and publishing it online. Thanks a lot, Google! 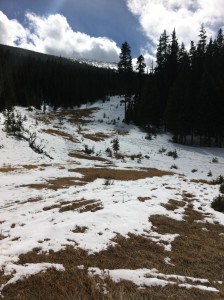 Anyway, the excursion started out in warm temps under partly cloudy skies, and the snow conditions looked terrible. And the conditions were terrible, at first that is. Slushy and crusty. But this is spring and these were spring conditions, though it was more like May than March.

Once we got going things improved a bit and winter returned. The base of Hidden Valley is at 9,500 feet and the old ski runs climb up to 11,500 feet to a ridge line above treeline. As we climbed up, snow squalls rolled over the ridge and would briefly engulf us in a blizzard before giving way to more sunshine. The squalls increased in length until we reached Trail Ridge road.

The road is closed in winter, as are most roads in Colorado that rise above treeline. It is expensive to keep these roads open, they would require snow plowing at least twice a day whether it snows or not, due to the fact that 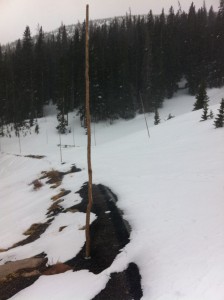 the wind blows constantly at this altitude, drifting over the unprotected roads. Trail Ridge road runs for many miles above treeline and the snow can build sometimes well over ten feet deep over the season.

This year has been a low snow year as can be seen in the pictures. Trail Ridge road can be seen on the left. Notice the tall poles marking the edges of the roadway. These are used to guide the plows when the they open the road in the late spring, usually around Memorial Day. The poles are probably 12 feet tall so that they are visible in deep snow, but so far this year they’re unnecessary, the snow is so thin you can see the road pavement and the ground.

We got lucky and experienced a full-on blizzard just above the road crossing, which was about our high point. As you can see in the photo below, the snow was driving down hard, at least for a few minutes. The wind died down but the snow kept falling while we removed the skins from our skis and turned for an excellent downhill run. The snow conditions had improved because of the inch or so of new accumulation, but wow, the mountains could really use about 10 feet of new stuff. Not likely this year I guess. 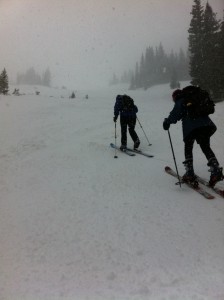