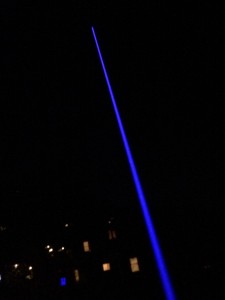 Ok, here are some of my recent laser experiments. Kids, don’t try this at home…

First I went out to the web to see what was the most powerful laser I could purchase for a reasonable price. What I found was someone selling the generator from a laser welder. It was pretty cheap so I bought it. I then bought a used power supply that could deliver 30 amps at 5 volts really cheap at an electronics surplus store. The power supply would deliver up to 60 amps so I built a resistor array that would limit the current to 25 amps and added a push button to turn the power on. The resulting setup is shown in the picture below. 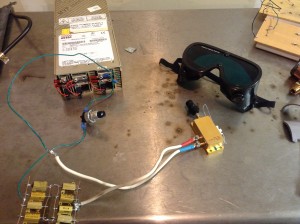 The power supply is the box in the upper left. The laser is the gold box center right with the current limiting resistor array bottom left. Now I wanted to turn it on to see what it could do.

Note the safety goggles in the pic above. These are absolutely required for everyone in the room when this laser is turned on. They must filter the correct frequency of light and be rated in strength according to the laser power. Click here to see this laser in operation. The video shows the laser burning a white cardboard box.

This laser has many dangerous characteristics. Besides the obvious risk of fire, this laser can burn skin. But the greatest hazard is to the eye. The light emitted by this laser is ten thousand times brighter than a laser pointer. You should never look directly at a laser of any power because the eye focuses and magnifies the light on your retina up to 100,000 times. That means a moderately powered laser can instantly burn a hole in the retina causing permanent damage. The injury happens faster than the human blink reflex.

There are a couple more insidious hazards for this kind of laser. First, because it is so bright even a reflection off a matte surface (non-reflective) can cause eye damage. And most dangerous of all, the light is infrared, meaning that it is invisible. A camera is sensitive down in the infrared range so you can see it in the video image, but to the eye it is largely invisible.

It’s a good idea to know what you are doing if you decide to turn on a powerful laser like this. I decided to limit my experiments using this particular laser…

So next I explored what was available in a smaller form factor. When you search these things out, you come up with the popular 445nm blue laser diode used in modern video projectors. There are many hackers who have designed tiny driver boards that allow these diodes to be overdriven to more than 3 watts using a small cell phone battery. What that means is that these lasers can be pushed to run more powerful than they are expected to operate in normal conditions. When the laser is overdriven in this manner, it can easily burn at a distance. So of course I decided to build one. I ordered the parts shown below: 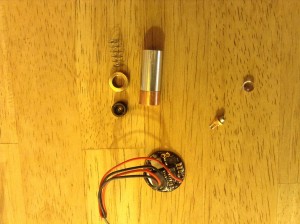 The cylindrical object at the top of the photo is what the laser is mounted in, only about an inch long. The round electronic board at the bottom is a hacker designed charge pump board that delivers the high amperage necessary to overdrive the laser. It’s about the size of a quarter. The laser itself is the small object just to the upper right of the round circuit board.

The small round object in the upper right corner is a glass lens. Normally the laser mount has a plastic lens to focus the beam but because this is an overdriven laser, a glass lens is required so that the lens itself won’t melt. 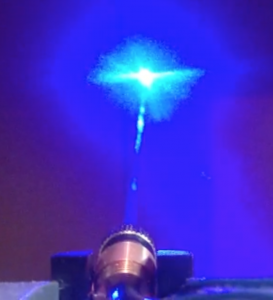 I got this one put together and tested it (wearing the appropriate safety goggles) and it easily burned stuff at close range. I took a pic of the laser firing at a cardboard box above.

Both of these lasers are the result of high tech manufacturing processes, that is, they are built using semiconductor diodes that did not exist only a few years ago. So perhaps the most interesting laser of all is a home built laser that requires nothing but common material and emits ultraviolet light. I was quite astonished at its simplicity, especially given the difficulties encountered in building the first laser in 1960. In that case it took the intense effort of a corporate research laboratory to develop the first working laser. I wonder how much of history would be different if it was known how easy it was to build a laser like I describe in my next post…