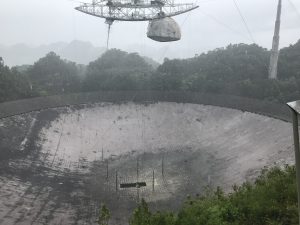 Today we made the arduous journey up through the mountainous rain forests of Puerto Rico to the Arecibo Observatory, the largest radio telescope in the world. Well, as of ten months ago, now the second largest. It was pretty cool to visit this observatory where they mainly do radio astronomy, measuring planets and observing the radio emissions of stellar objects. I’ve read about this observatory since I was a kid and it was about as cool to me as visiting CERN in Switzerland, which we did a few years ago.

The instrument is basically a humongous dish antenna built into a huge crater in the haystack-shaped karst hills of Puerto Rico. The bowl is a reflector and the receiver is a 900 ton instrument suspended over the dish by giant cables strung between three towers rising around the rim of the crater. In the pic above, it is pouring rain as I’m sure it does every day at the observatory located in the upland rainforest.

To get to the observatory we drove for two hours up narrow, roller-coaster backroads peppered with deep potholes and blind corners. The good news: You drive on the right hand side of the road! Most of the way we were in a dense rainforest with few houses. Totally worth the trip!

One last note: The Arecibo antenna was used to transmit a message intended for intelligent extraterrestrials. It did so twice. Below is a graphical representation of the message. Do you understand it without interpretation? Other than some recognizable symbols and some guessing, I didn’t. How are aliens supposed to understand this? Why not just send a picture of the Death Star, that way they’ll know we’re here but they’ll be on their best alien behavior…

If I Don’t Understand the Message, How Are Aliens to Understand?