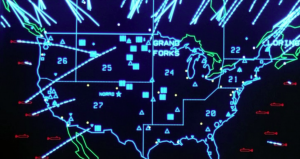 Incoming! Ahhhhh! (From the movie WarGames)

The pic above is the display at NORAD of incoming ICBMs as dramatized in the best hacker movie ever made: WarGames. The underlying theme was that a high school student hacks into a government supercomputer and nearly starts a nuclear war by accident. I love this movie, the hacker is using old pre-IBM and pre-Apple microcomputers and a phone modem to explore and hack the digital telecom of old: the landline phone system. He also used his skills in non-computer ways to keep one step ahead of his government pursuers, like opening an electronic lock by tape recording the keypad tones and playing them back, and by hacking a pay-phone system by reproducing clicks to bypass the pay box. Just about everything he does (sans the beautiful girlfriend of course) is classic hacker. And this was 1983!

An interesting piece of trivia: President Reagan saw this movie and asked his staff if it could happen in reality. They investigated and reported back that it was far worse than portrayed (!) which led to the first cyber-security National Security directive to be issued by a president.

The WannaCry event should be a wakeup call (really one of many) to the government. At a minimum, some sort of agency should become responsible for cyber security infrastructure defense. I also believe the USG should enact laws that require at least a minimum amount of security be built into all computing devices sold in the country. We do it for radio emissions (the FCC label you see on all computers) and power safety. For healthcare it’s the FDA certs, for airplanes it is the FAA. The FAA is now regulating toy drones, seems like cyber security could be regulated at least a bit. Having been in the computer industry for decades I can say it will hardly make a dent in manufacturers profit, even though they are certain to complain of any new regulation in this area. Example: Some of the best smartphone security exists in iPhones. Apple is wildly profitable.

The Shadow Brokers are now saying in their fake broken-english writing that they will release more leaked code like a “…wine of month club[SIC].” They also claim to have nuclear program secrets that makes the WarGames reference above apropos. So we are looking at possibly larger hacking attacks and maybe even a nuclear hacking attack. Oh boy. And we haven’t seen the worst of the Internet of Things problems yet…

Stay tuned…. If you can!