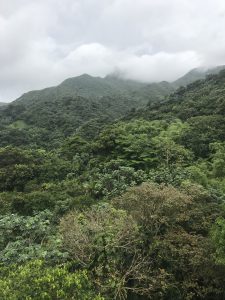 I have immersed myself in rainforests from Nepal to Cascadia, Peru to Hawaii, Patagonia to New Zealand. I love the diversity of life from the mosses to the towering trees forming the canopy. The yellow, red, purple and white flowers that spring forth in the humid shade.

So I guess it was appropriate to visit one of the great rainforests of Puerto Rico on my birthday. It was quite spectacular, though we didn’t get to hike the trails on this trip (we’ll do that later). On the drive there it was, well, raining. Torrentially. But not so much while we were in the forest, we got some good views of the mountains.

We learned a few things. Before the Spanish arrived and took over, the island was occupied by natives known as the Tainto. They called the island Borinquen. This is a name for the island that is favored over Puerto Rico by many locals today, similar to the way the original native name Denali was favored over Mt. McKinley by modern Alaskans.

The Tainto believed the great spirit Yucahu would over and protected Borinquen. The legend has it that Yucahu resided at the top of the highest mountain in this rainforest, now known as El Yunque Peak.

When you visit the rainforest and experience the power of life and the elements around you, it is easy to understand why the ancient natives believed such a deity resided in the highest, most inaccessible location, surrounded by the vast forces of nature.

And… Another year older! 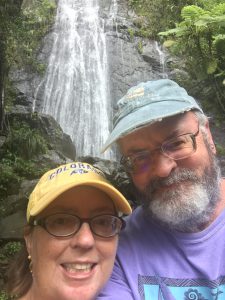