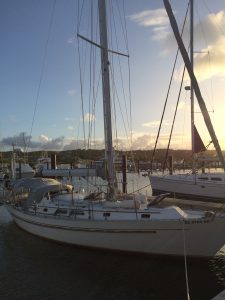 We finally turned the southeast corner of PR to arrive in Palmas del Mar today. I have to characterize the last two days as quite difficult, and as a matter of fact, traversing the southern coast of PR has been some of the most difficult days so far from our starting point in Rock Hall, MD.

Though getting down to the Caribbean has not been easy, traversing the last 80 miles or so directly east has been slow and rough, fighting both the wind and the waves. Yesterday we travelled for 6 hours to gain less than twenty miles. We anchored at Porto Patillas and because our electronic chart had a bug, we didn’t have enough detail to go close into shore safely. We noticed several other boats about a quarter mile closer to shore, the obvious anchorage, but because we didn’t have a good plot of where it was too shallow, we opted to stay out a little further.

That proved to be problematic. We had side-to-side rolling all night because the protection was not good. I decided that the boat rocking in this manner is by far worse than any other motion. You can’t even lay in the bunk without rolling side-to-side. Neither of us slept much. We were more than happy to get up at 5 a.m. and move on. I started having motion sickness as soon as I got out of bed, something that has never happened. Drugs took care of that. Drugs, baby, drugs.

We turned the southeast corner of the island and started moving north to stop at Palmas del Mar, a very nice marina. We were so tired after we got here with Shelly’s professional docking skill, that we crashed for the afternoon and haven’t explored anything yet.

Forgot to mention that in Salinas, we saw quite a few manatee. Apparently there is a freshwater spring that flows into the bay and that is what attracts them. We’ve seen many more manatee since leaving Florida than we did while there. Also, this side of the island is spectacularly beautiful. Lots of tropical forest covered mountains and no big cities.