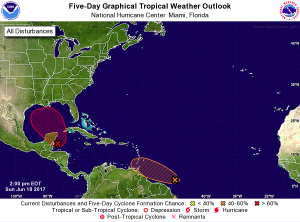 Get the Party Rolling!

The National Weather Service or some agency in the weather prediction end of the federal government designates hurricane season as running from June 1 to November 30 for the tropical Atlantic. It’s called “hurricane season,” though hurricanes are only the most powerful storms. There are also many smaller storm systems from tropical waves to tropical depressions to tropical storms. The better term to use is tropical cyclone.

The peak of the season is usually late August through the end of September. However, this season is looking a bit ominous: There are two systems they are watching for tropical formation and it is only mid-June. The tropical cyclone prediction map from NOAA above show the probability of two systems forming in the Caribbean next week. The leftmost red area has a 90% chance of forming and the storm on the lower right has a 60% chance. Neither are predicted to “hit” Puerto Rico at this time but the storm off Mexico is already causing the winds here to increase a bit.

Interestingly, if these systems get big enough to become named storms, they won’t even be the first of the year, tropical storm Arlene formed in mid-April, only the second time this has ever been observed. But wait! Even more ominously, a big stationary tropical low formed in mid-March when we were in the Turks and Caicos, I posted a pic of the storms at the time (below): 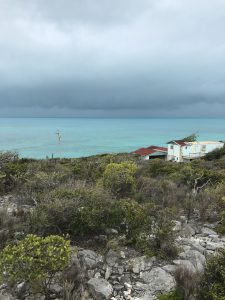 This storm almost got big enough to be named and that would have been a first ever. It generated huge waves in the TCIs, and that’s the thing about these tropical systems. Even if they don’t form named storms, they are usually associated with lots of rain and wind.

So our first tropical cyclone season in the Caribbean may be a busy one. But hey, you can’t say you’re a salt encrusted sailor until you’ve spent at least one hurricane season in the “belt.” We’ve ordered new, doubled dock lines…