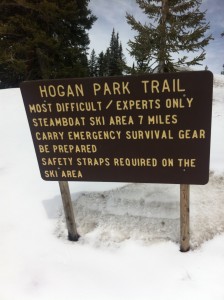 Dire Warnings to the Unprepared!

Ok, I’ve been too busy to post earlier this week but here is the latest. Last weekend we did the long Hogan Park backcountry ski tour near Steamboat. The trip starts at the Walton Peak parking area on Rabbit Ears pass and ends at the base of the Steamboat downhill ski area. It’s seven miles of mild up and down touring through the pine and aspen forest that ends at the base of the Morningside ski lift. From there you ride the lift up (the resort lets you ride once for free) and do the long downhill run to the base area. We then hired a taxi to take us back up to get our car at the top of the pass. Overall, the tour took about 6 hours. Click on the map below for a detailed view of our route. 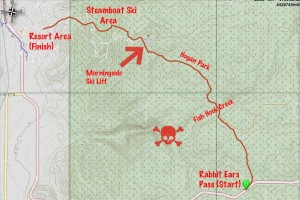 The map shows the GPS track of the route. I used MotionX GPS app on my iPhone and it worked great. The cool thing about this particular app is that it allows you to download maps for use in the backcountry where you probably won’t see a cell site. Google, Bing and Apple don’t allow you to download maps, you need a cell or wifi connection to use their mapping applications.

The map shows the area just to the southeast of Steamboat Springs. The resort area is in the upper left corner of the map. The downtown area of Steamboat is slightly off the map to the northwest. I labeled some of the interesting spots. The tour starts at the bottom right where you see the highway at the top of the pass. The first thing you see is the sign pictured at the start of this post warning that this is for “experts only!” 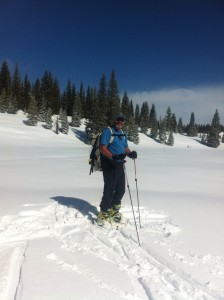 To me this kind of warning is a little over the top. It’s probably necessary though, given the nature of this route. I’m not sure you need to be an expert, but you certainly must take more care than the casual skier might. It’s not even close to difficult in terms of physical difficulty. There aren’t any super-steep or long climbs on the route, and it really isn’t that long. But those aren’t the only aspects to consider when in the mountain wilderness. The route is marked about every 50 feet by blue diamond signs, either nailed to trees or poles in the open field. Seems easy to follow, but the real difficulty here is navigation.

Several conditions combine in this area to make navigation tough. If you miss a blue diamond route marker, you have very little to help you with dead reckoning.  Why? First is the “flatness” of the area. There just aren’t many visible landmarks to orient yourself. There is no overarching mountain visible like there is in most areas of Colorado. Also, the terrain seems to repeat itself as you wander: Hills covered with trees separated by wide open meadows, followed by the same. 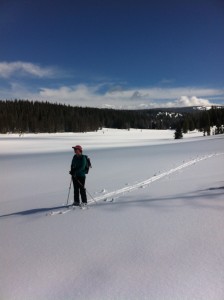 Add to this the notorious Rabbit Ears weather: Whiteouts seem to be much more common here than anywhere I’ve been in the state due to fog and snowfall. And it snows here more than you might expect. This tends to cover any tracks from previous skiers that you might follow. See the pics on the left and above right, the only tracks you can see were made by us.

The skull and crossbones on the map indicates the area where some lost skiers get into trouble. If you turn west too soon you run into an impossibly steep canyon. Skiers have gotten stuck, waited a freezing overnight and subsequently rescued in this impassible terrain. The reality is, navigation is not difficult, especially with the tools available today. You just have to be disciplined enough to do it. 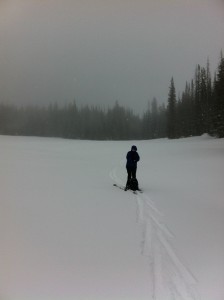 Shelly had her compass out and checked our direction the entire time. Also, if we hadn’t seen a blue diamond marker in a while we would retrace our steps to get on route. Best of all, the GPS app indicated exactly where we were at all times. In combination with a Trails Illustrated map that plotted the route, we could quite easily determine our position. On top of that, we actually did confirm our position periodically.

There was no one else out there and breaking trail the entire way made this feel like a long haul. A “long haul” falls somewhere between a “good day” and a “death march.” As we got to the Hogan Park area, a mile and a half long open meadow, the weather started to deteriorate until we were in a full-on blizzard, as seen on the right. By the way, click or tap on any picture to see a large version of it. 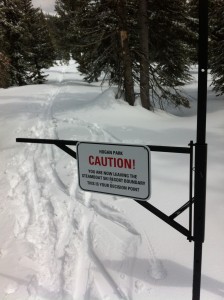 Anyway, after about four and a half hours we finally arrived at the outermost point of the Steamboat ski area. Yeah! The most difficult part was done. The ski area is roped and fenced in. This is meant to keep customers inside the area, not to keep us out. But there was an actual gate we needed to get through. Looking back, we read the sign on the left. The Ski Patrol does not want people to leave the area because this can cause them big headaches. If a customer goes missing, the Ski Patrol has to start searching for them at the end of the day. It’s always somewhat surprising that a sign needs to be put up warning you of your “decision point” to enter the forest, but there it is. 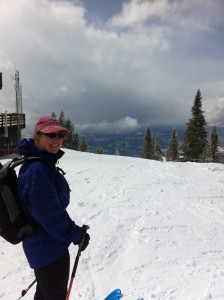 Anyway, the Morningside lift is right there. We adjusted our skis from touring mode to downhill mode and got on the lift. The operator asked how the trail was as we boarded. He could tell by our packs and lack of lift tickets that we were not downhillers but super-cool backcountry adventurers.

You might think at this point, with skiing down to the base being the only thing remaining, that navigation was over. You would be wrong. At the top of the lift, pictured on right, you are as far from the base as you can be within the ski area, and you have miles to go. There are several “dead ends” that force you to ride another lift to get out. Feeling shagged, we wanted to make this part as short as possible. In other words, navigation through the ski area is desired. 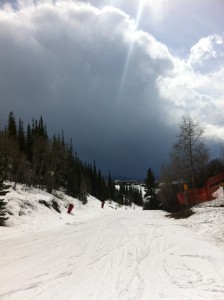 It’s not quite the same difficulty, of course. We did this route a couple of years ago and it was the first time we had skied the downhill area. Last weekend was the second time. It is a huge and most excellent ski resort. We’ve owned our place in Steamboat for almost five years and have yet to buy a lift ticket. Funny how that works out, but really there are so many other skiing opportunities in the area and the lift tickets are very expensive with no chance of getting a discount.

It takes a long time to ski down, especially if you quads are already burnt out. The snow at the top was fantastic but near the bottom it was thin slush. A big storm cloud loomed on the horizon, as you can see on the left. It looked like a summer thunderstorm.

Finally at the end, we found the “pub at the end of the rainbow,” the Slopeside Grill. We stopped in for a celebratory beer… NOT! Unfortunately we still had to get the car from the pass! No problem, the beer could wait. 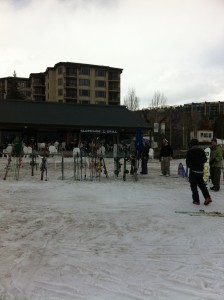