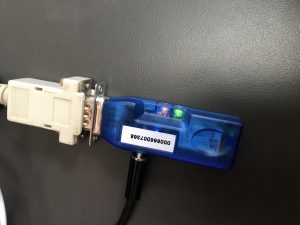 Been a while since I’ve posted anything due to the long holiday weekend as well as trying to get some maintenance done. Plus a cool hack of my shortwave radio email system.

I mentioned that while we were anchored at Vieques, we found a few things that were not working. One was the anchor light and another was the navigation lights. It was strange that they both stopped working at about the same time so I looked around and found the terminal block below had corroded: 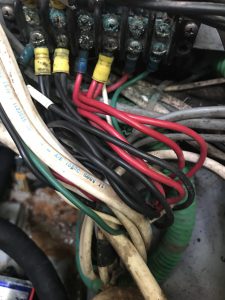 The block is at the top of the photo above the wires. This terminal block was put into place so that the mast could be removed without ripping out all the wiring. All the wires connected to this block go up the mast, this includes the deck lights, a steaming light that you turn on while under power at night, and of course, the anchor light that is located at the top of the mast. The connectors were pretty much corroded from the seawater and salt air.

I had to find another terminal block somewhere and so we rented a car for a couple of days. This part can be found in the most out-of-the-way hardware store in the states, but the only store that had it here was a marine supply store. After I finally acquired the part I removed the old one, shown below:

I then cleaned or replaced all the wire endpoints and installed the new block shown below. When compared to the one removed you can see how much corrosion is evident: 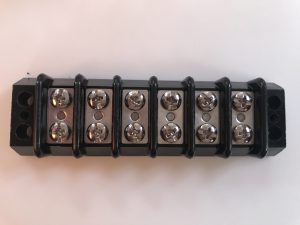 After replacing this block, the mast mounted deck lights worked again! They haven’t worked since we bought Good Karma. Unfortunately, the anchor light still didn’t work so something else is wrong. This did not fix the navigation lights either, which makes sense because they aren’t on the mast. Oh well, this needed to get done either way. So I still need to fix the anchor light and the navigation lights.

On another subject, the photo at the top of the posting is a serial-to-bluetooth adapter that allows me to send email from my Mac computer to my radio without being wired to the radio. The previous system used a  wired USB port, this is wireless as it should be in the modern day. Why do this?

Well Shelly and I are working on a secret project that, if successful, will revolutionize radio email! Well, perhaps “revolutionize” is a bit strong, but at least it will bring radio email into the modern world. More on that as we progress.

Until next time, continuing to hang out in the marina and watching for tropical cyclones…


Posted in Hacking!, Sailing by Mark with comments disabled.