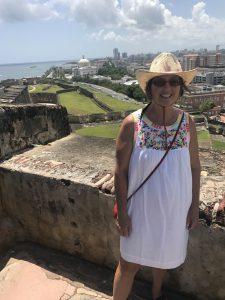 A Colorado Cowgirl in San Juan

I noticed it’s been about a month since my last post so I thought an update was due. We haven’t taken the boat out since the end of June due to maintenance of both our boat and my knee. We are still attempting to get our anchor light and navigation lights up and running before heading out again. Hopefully they will be working early next week.

After suffering for 4 months with some extraordinary knee pain, I scheduled an appointment with a knee doc during our visit to Colorado. Got an MRI and am getting it scoped in September, hopefully that will clear up the current problems. In the meantime they gave me a cortisone shot and that helped immensely. My knees have held up extremely well over 40 years of intense pounding from running, mountaineering, skiing and biking. I’m not surprised that I’m starting to have a bit of trouble with them and expected it to start many years ago.

While in Colorado we visited friends and went to my family reunion. We also visited Steamboat where Shelly found the cowgirl hat she’d been looking for (pictured above). It was just as hot in Colorado as it is here in Puerto Rico, but at least the humidity is reasonable in CO. It’s been over 90 degrees with close to 90 percent humidity since we’ve returned.

Other than that we’ve been working on our SSB radio app for IOS devices. One of Shelly’s IOS apps is going to be demo’ed at a conference next week, and soon I am about to be issued one of the coolest patents ever. More to come!

Below is the cemetery on the coast in old San Juan between the two forts: 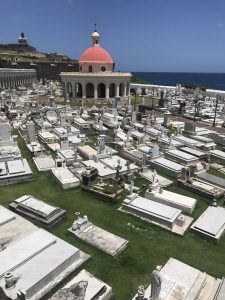 Posted in Sailing by Mark with 2 comments.