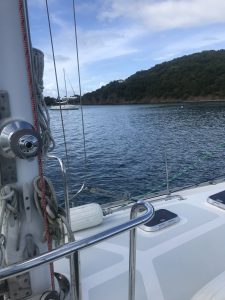 Today we are anchored off Palomino Island, which is off the northeastern shore of the main island of Puerto Rico. We left our slip in Palmas yesterday morning intending to sail (motor really) all the way to Culebra Island, about thirty nautical miles away. Over the day we were making such slow progress beating against the waves and easterly wind that we wouldn’t get to the anchorage by nightfall, so we opted instead to make an overnight stop here at Palomino.

As is the norm on a weekend where the local boaters party, the music from shore was phenomenally loud until around 10 on Sunday night. Seriously, I don’t see how anyone could have communicated with anyone else there on shore under such intense sound. And this is typical of Puerto Rico. Today it is quiet, parties are done until Thursday (or maybe Wednesday).

Anyway, this morning I lobbied for us to return to the marina due to the threatening potential tropical weather systems east of us. The map below is the current 5-day outlook. You can see TS Gert north of 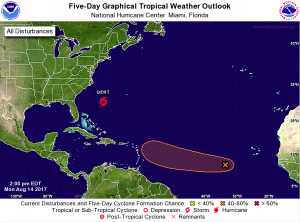 of us off the southern east coast. The system I am worried about is shown in the lower part of the pic with the 5-day path headed straight toward our area. But why cut short our trip when it is at least 5 days out? Because this is weather and like all weather predictions, 5 days out is an eternity. It could move and develop faster and since we are entering the height of tropical cyclone season, I figure it is better to be prudent, at least for our first season here. Even though they appear to move slowly, it is pretty much impossible to outrun a tropical cyclone in a sailboat.

In the meantime, we had yet another system fail on our boat, one of the sump pumps that drains the shower. It isn’t critical and we discovered it before we left the marina actually, but we need to fix it. Also, it was exceedingly difficult to start our generator today, it hasn’t run for over six weeks. Like the engine, we need to exercise it to keep it happy (apparently).

Meanwhile, back in Palmas the iguanas were out in force the other day. Saw at least 6 of them: 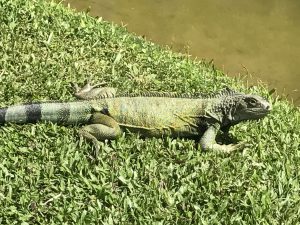 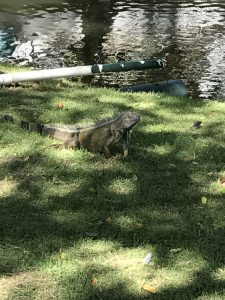 We hadn’t seen them for a while and were wondering where they were hiding. Must’ve been an iguana party somewhere..